For the most part, America’s forefathers patterned this nation according to the laws given to the nation at Mt. Sinai.

While the nation was establishing its Bible-based foundations in 1776 with the making of the Constitution, the Bill of Rights, and the Articles of Confederation, the enemy established headquarters in America as well through the Illuminati, Free Masonry, and Marxists organizations to name a few.

Two trees were growing together in this nation, resembling the wheat and tares parable Jesus shared in Matt. 13:24-30.  These two trees were a result of two types of people who first landed in this nation:  The Pilgrims who landed in 1620 who wanted to establish a colony based on Christian ideals, and the Virginia colony of 1607 whose primary purpose was to gain wealth.

At America’s core, she was destined to represent a land of Jubilee that enjoyed freedom, liberty, and justice for all.  It is no coincidence that America has 50 states as 50 is the biblical number representing Jubilee: a time when debts were settled, slaves were free to return home to their family and land, and inheritance was returned to its rightful owners (Lev. 25). Jubilee was a part of God’s provision to relieve God’s people from debt oppression so that every person had the opportunity of grace to experience the fruitfulness of God’s promises.  America’s national anthem declares, “The Land of the free, and the Home of the brave.”

However, in the formation of our Constitution, a deviation from God’s foundational word happened.  This opened the door for the CRACK that allowed the enemy to form roots alongside the good of America’s divine purpose.  One of those deviations happened with a vote to disregard the laws of Jubilee that would set slaves free and debts canceled so that ALL could enjoy a fresh start of freedom.

Historians write that Thomas Jefferson, a slave owner, struggled to draft the Declaration of Independence.  Freedom was the heartbeat of our Forefathers establishing America and opposing England’s rulership that oppressed their religious freedom as well as burdened the people with “taxation without representation.”  Jefferson struggled with the concept of how to deal with the issue of slavery that had come to America as well if “ALL men were to be created equal.”

At the time, slavery had gone past God’s “lawful” guidelines established in God’s word that clearly outlined how to work off a debt owed in righting a wrong.  In biblical days,  one became a “slave” because they had committed a crime that required debt to be paid to one who had been wronged.  If they didn’t have the money to pay the debt, they were then required to work it off to settle the debt.

This law had NOTHING to do with race or ethnicity.  This had to do with settling debts for breaking the law.  God even included the Law of Jubilee so that all “slaves” weren’t indebted their whole life for a crime they committed.  The Laws of Jubilee (Lev. 25) set the debt-free so that ALL could experience the freedom to live.  This was a foreshadowing of Christ coming to settle the debt and allow His sacrifice to set people free of the debt of their sin.

Some of the original 13 colonies had slave owners that had become more interested in the free labor that was causing them to prosper in the new land than to honor God’s laws of payment of the debt owed.  Slaves had also come from Africa and Haiti that were sold for profit, not because they sinned and had to pay off a debt.  Greed voted that day, and the laws of Jubilee that Thomas Jefferson had included in the Declaration of Independence were denied and taken out.  The Georgia and South Carolina colonies would not agree on the Constitution until Jefferson omitted the verbiage that challenged their right to have slaves.  The vote led to the CRACK, and America has suffered racial division and strife as a result of that compromise to God’s law.

The Declaration of Independence says:

“WE hold these truths to be self-evident, that all men are created equal; that they are endowed by their Creator with certain unalienable rights; that among these are life, liberty, and the pursuit of happiness.”

Perhaps that is why the Liberty Bell cracked in it’s making and still remains cracked for all to see as it has the Jubilee scripture of Lev. 25 inscribed on the bell.  The first Liberty Bell was made in 1751 that had the words on it:  “Proclaim Liberty Throughout ALL the Land Unto ALL the Inhabitants thereof.”  It broke at the first stroke of the clapper.

The New Bell hung in City Hall of Philadelphia and rang at every important event.  It tolled on the death of Chief Justice John Marshall in 1835 and cracked again, never to be heard again. 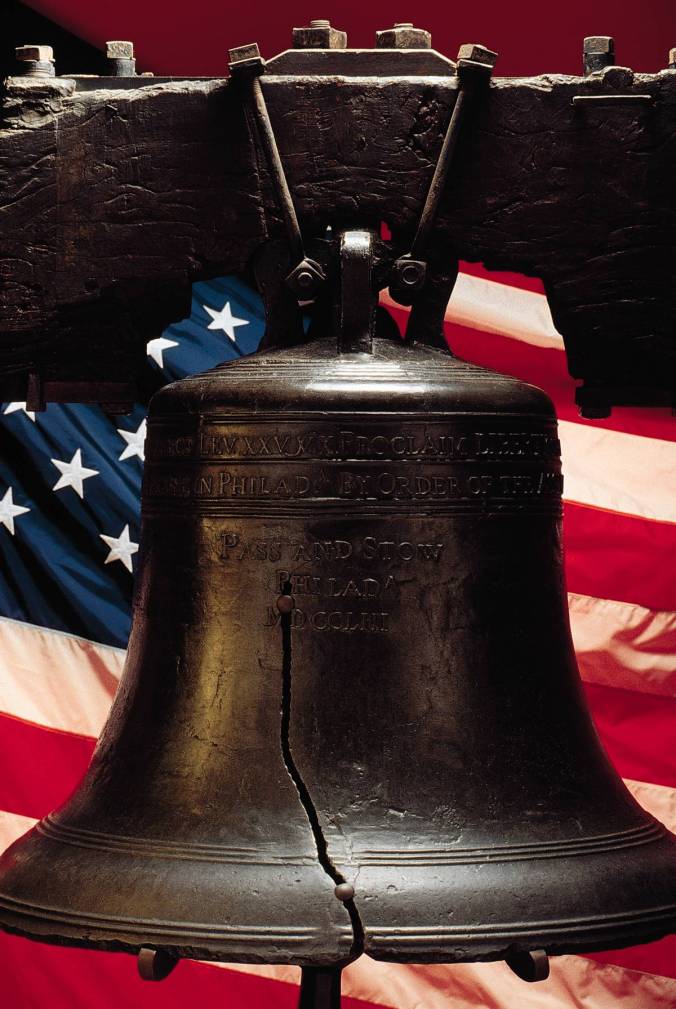 We are now seeing all these tares of the CRACK coming up out of the ground and into plain view.  This division was fueled by compromising God’s Law, and the enemy took the compromise and stepped in to build his government and oppress God’s people which produced division, strife, hatred, racism, anger, destruction and murder.

The Law of Jubilee also included the laws of usury (Lev. 25:36,27).  God was clear that His people were NOT to apply USURY when lending money.  Therefore, the Law of Jubilee included all mortgaged land so that the land could rest from debt as well.

Unfortunately, usury was also adopted as an acceptable practice in American business, which negated the opportunity for personal and national “Jubilee.”  This is why our nation today has a national debt crisis and why there is such schism between the rich ruling over the poor.  In God’s blueprint, He made a way for ALL to prosper IF they obeyed His voice and commandments, and usury was forbidden.

Our banking national banking system has been built upon usury.  God is about to deal with that CRACK as well.